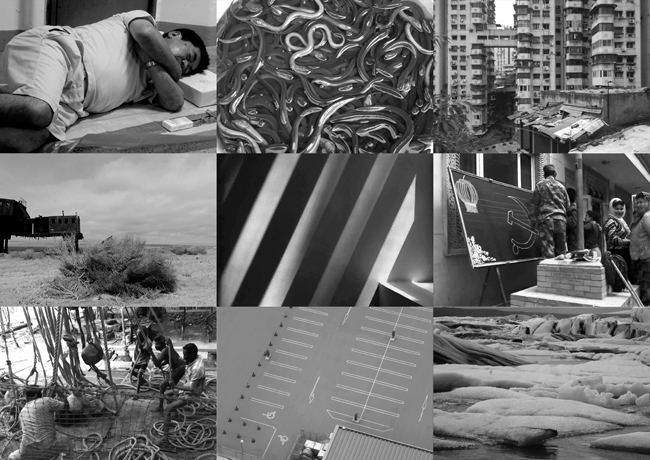 Nikolaus Gansterer’s and Simona Koch’s art project takes as starting point, a several-month journey by bus, hitchhiking, and ship from Vienna to Tokyo—via eastern Europe, Russia, Central Asia, and China—with the goal of gathering film recordings during the trip in order to develop a “living screenplay of the moment.” During subsequent travels through Cuba, India, Iceland, and Egypt, further essential film material was added.

Processes of permanent change and progressing globalization of time zones were omnipresent on these intense trips—with tours through megacities, the rural areas located between them, extremely diverse zones of growth and decline, and deserts and non-sites. Particularly impressive, however, was an awareness of phenomena of temporality, which became the main source of inspiration for the video installation “Minutes from Now.”
Individual realities and their associated experiences of time are shaped differently depending on where one is, and one’s personal, political, and cultural embossment. For time eternal, cities—agglomerations of experiences and developmental sites of innovations— have thus generated different speeds and temporal horizons than towns.  The experience of permanently changing time zones of acceleration and deceleration has become the twenty-first century’s fundamental constant and guiding difference.

INSTALLATION
In the installation of the film material, complex phenomena of temporality are translated as follows: on three projection screens situated towards one another in a star-shape, there are always two films screened next to one another. Should a viewer leave one video niche to go into the next, the occurrences in the niche that has just been left continue, although, of course, the viewer is no longer a part of them. Through the star-shape arrangement, one of the two films is always mirror-inverted, meaning that the pictorial material thus enters into a new referential relationship with the neighboring film. The viewers are invited to move from niche to niche. All three films playing can be seen from both sides of the projection screen. This is also the case in “so-called reality,” that a situation seems different when one adopts a different position as observer—or rather, an observed situation develops further—even when you move on yourself.

MINUTES FROM NOW
Nikolaus Gansterer’s and Simona Koch’s video installation “Minutes from Now” is inspired by a fictive-ethnographic approach (Henri Michaux) and shifts into view space-time phenomena (Heisenberg’s uncertainty principle). Footage of very different places in the world are edited together and condensed to form a distinct time-space.
The title “Minutes from Now” refers, on the one hand, to the apparent measurability of time, and on the other hand to the fragmentary notes and protocol-like moments that are captured, which are meticulously composed together in the installation.

Intense sound textures, disturbing scraps of conversation, and meaningful visual sequences deliberately dissolve common time constructions and open insight into the plural time-worlds of the  Anthropocene—or even Anthropochronos, which is shaped by permanent renewal, construction and deconstruction, hypermobility, acceleration and raging standstill, and their immanent areas of friction. 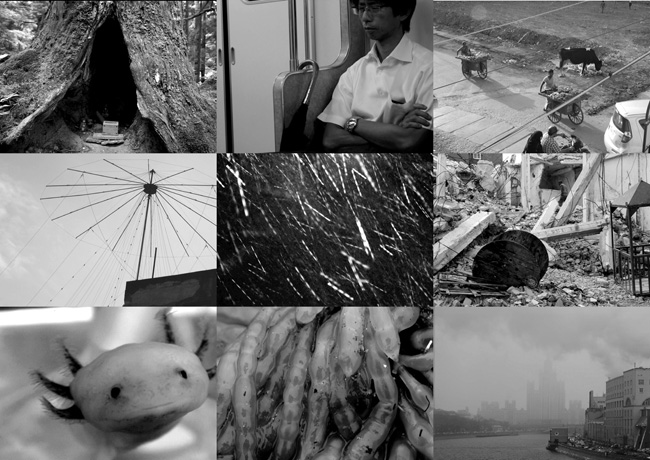 Generously supported by Bundeskanzleramt, Austria and via residencies funded by Goethe Institute.