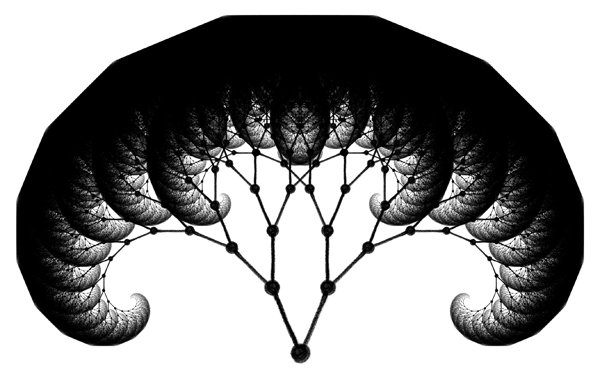 Model of an universal family tree

All life is involuntarily part of a gigantic chain reaction, which extends back to the beginning of life. Indeed, so far no life has developed outside the biological reproduction chain.* The work “Legacy” shows a growth structured on the assumption that every person is the product of two parents – a mother and a father.
When a person is born s/he is the final link in an ancestral chain, which actually goes back to the beginning of life and includes all of man’s ancestors: prehistoric men, apes, early mammals, reptiles, primeval sea creatures through to the first single-celled organisms that form the basis of life as we know it today. As soon as a person reproduces, s/he likewise becomes an ancestor, and a part of the ancestral chain, and with each subsequent generation of descendants s/he moves deeper into the network of ancestors. As such, the work “Legacy” represents a model of a universal family tree.

*In 2010 American biotechnologist Craig Venter (who won the race to decode the human genome) and his team announced they had created an artificial organism capable of life. To achieve this goal, the team had synthetically constructed the entire genetic make-up and transferred it to the body of the bacterium mycoplasma capricolum, from which the DNA had been removed.