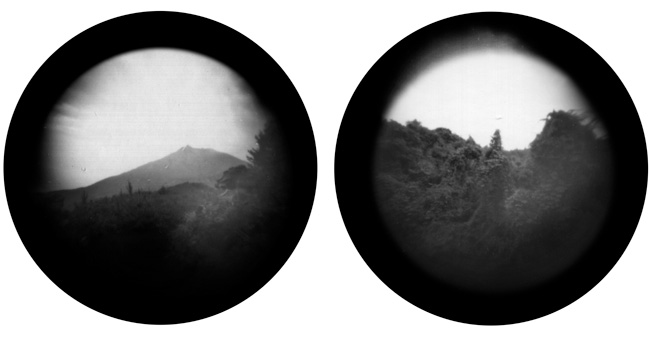 In the middle of the 19th century, on a small island in the Moluccan Sea, British tea and spice trader John Hubberfield by chance discovered a quite unique world.
Many years later he described the eventful occurrence in a letter to the Royal Society in London:
[ … ] “The constant westerly wind and currents unknown to us conspired to send us off course. With drinking water stores falling low, on October 29, 1859 we were essentially forced to head for a small island that was not marked on our charts. [ … ]
When, along with a group of sailors, I set foot on the island with its many sharp crags it initially did not seem to be special. What a miserable tropical island! It was completely covered with lavish vegetation, and surprisingly we found no traces of mammals, let alone humans. The humid island air was filled with the buzz of insects and the strident calls of bird species we did not know. We cleared a path through the thick jungle undergrowth using our machetes, and thus only made progress very slowly and with great effort. When night fell we set up camp in a glade. [ … ] 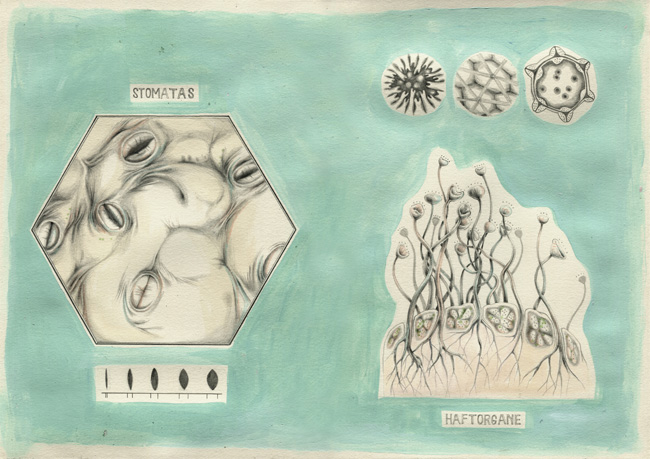 It was only here that I first noticed them – it was as if the opulent nature surrounding me was filled with small creatures similar to humans! I sensed them standing upright or crouching between the leaves; they seemed, like fruit pods, to be completely at one with the nature around them. [ … ] At first I thought this nocturnal discovery was simply a sign of another bout of fever and the result of total exhaustion given the exertions of the last few days at sea – but my companions also noticed them. Indeed, the next morning they were still there, so we had not been hallucinating! And yet we could not for a moment believe what we were seeing with our own eyes! [ … ] Neither I nor any of the men felt any desire to take one of these strange creatures along with us – so completely united with their surroundings did they seem to be. Out of concern for the fate of this rare natural treasure I ordered my companions to remain completely silent about what we had seen. We returned that evening with drinking water and some fruit to the ship, and continued our passage eastwards. [ … ]” 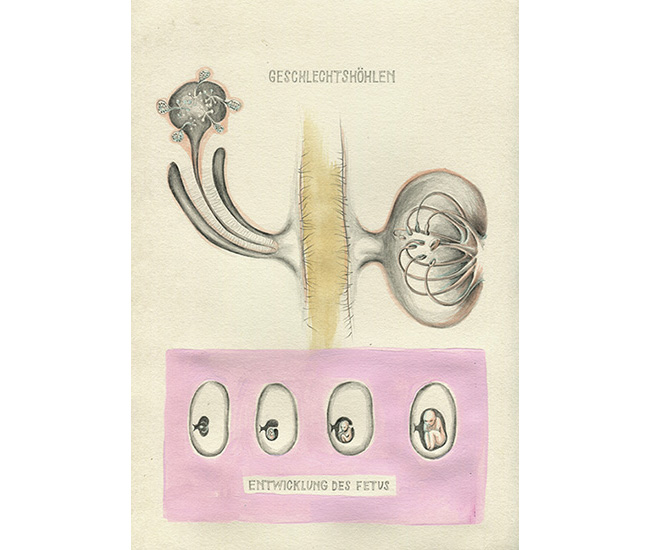 Above: sexual cavity – left = male; right = female; below: development of the foetus

We can conclude from his diary entries that John Hubberfield was utterly fascinated by this so very different world. And his enthusiasm would never fade. After returning to England he spent several years preparing another expedition to explore the plant people. The pretext for the voyage was to “search for new kinds of healing plants and spices”, and he told no one of the real reason for the trip. In light of the rapid development of microscopy and photography, he hoped to be able to research the real nature of these strange island inhabitants. On March 7, 1866 he was successful and set sail aboard the Fairy Mary for the high seas. Some of the sailors who had discovered the plant people with him on the first trip were likewise on board – Richard Adams, Thomas Taylor, and a man they called Brown.
They did indeed find their way back to the impressive island on which a high volcano towered skyward, as Hubberfield noted in his diary, the crater surrounded by a crown of clouds. The men put ashore with their equipment and spent several years studying the creatures that Hubberfield named homo plantae. His recordings are all we now have as the basis for our rudimentary knowledge of this wondrous species.
Some assume that homo plantae is a cross between a plant and human being. The assumption also is that a series of symbiotic relationships and mutations qua adaptation to external living conditions ultimately led to homo plantae. If organisms enter into intense symbiotic relationships then on occasion this can prompt them to exchange genetic information.

The island’s constant and also largely secluded microclimate (or so Hubberfield’s hypothesis) led to a unique kind of flora and fauna developing. The complete absence of carnivorous creatures enabled a highly specialized biotope to arise in which unprotected plants and animals live – without armor, teeth or thorns, most of which feed themselves autotrophically. 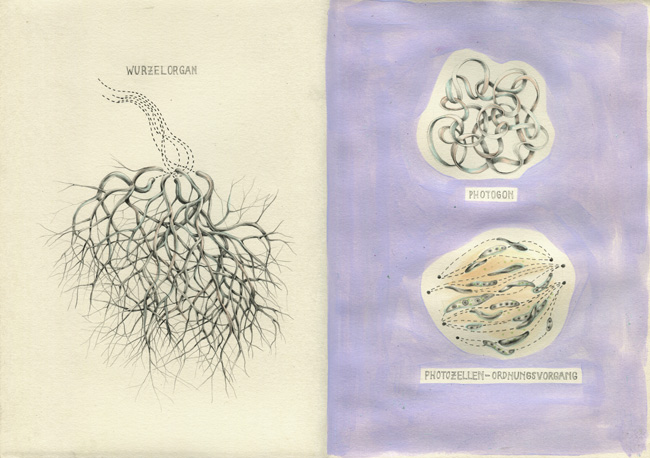 In his notes, Hubberfield describes the homo plantae and their habitat as follows (The passages reproduced here are extracts from John Hubberfield’s notes and drawings as were rediscovered in the late 1960s in his estate bequeathed to the archives of the Royal Society and brought out in a scholarly edition by Jakob Preuss: Homo Plantae – Ein autotrophes Wesen?, De Gruyter (Berlin, 1974)):

[ … ] On the outside, the homo plantae has the basic characteristics of homo sapiens – head, torso, arms and legs, and yet is altogether smaller in stature. Its skin is transparent, shimmers green and is vaguely reminiscent of water plants. It enables it to disguise itself as it were and blend visually with its surroundings. Indeed, the surface of the skin cells seems to be able to actually reflect the surroundings. [ … ]
[ … ] Stomatas, or minute guard cells on the skin similar to those in plants, open and close to release or absorb gases. The transparency of the skin meant that even without the help of a microscope I was able to gaze into their innermost parts. In the lower third of their abdomens the females have a kind of amnion, while the males have a seed cavity. The internal organs, all of them strongly backward to my eye, lie above the sexual cavities. A heart beats in the middle of the body, albeit one far smaller than ours. It supports providing the organism with a watery fluid of nutrients from the earth. It beats in the body’s own rhythm, but in keeping with day and night phases, phases of quiet and wakefulness. [ … ]

[ … ] Homo plantae has finely bifurcated roots that sprout directly from its feet, legs and hand regions and can anchor themselves in the ground. The small detoxification organs, organs similar to kidneys and livers, filter and cleanse the nutrients absorbed through the liquid and excrete what cannot be used via the special stomatas in the skin. The float organs, and I assume what were once lungs have evolved into these, enable homo plantae to immerse itself in water or rise up again – they are also used to take on water and to filter nutrients from the water. [ … ]

[ … ] Homo plantae communicates, like its plant relatives, using fragrances and through its roots. Moreover, it would appear to have a kind of “telepathic network” linking it to the other members of its species. [ … ] It can make strangely high notes and songs, using its mouth, tongue and the vocal chords in its pharynx … however, it seems to me that it uses the “telepathic network” to talk. [ … ] I assume that it perceives not using eyes, ears, nose, taste or tacticity, but rather by means of a connection to its surroundings that ensues through the outer limits of its cells. [ … ]

[ … ] Tonight, Adams has now succumbed to the fever. I am now the only homo sapiens left on the island. The time has come to bid it farewell. The world must hear of this place and protect it; these creatures must suffer no harm! [ … ]

[ … ] I never managed to come into direct contact with them or communicate with them by language or gesture. The only way was to sleep in their immediate proximity and listen when half asleep to their rhythmic sounds. In lucid dreams I slowly started to become familiar with their quite unique and primordial vegetal form of existence. [ … ]

[ … ] I would estimate that the individuals reach an average age of 35 years. I was then able to observe how the old ones gradually changed. Within the space of only a few weeks the transparency of their skin dimmed and they started to “embark” on the new phase – their skin becoming ever more like bark. Their limbs and roots resembled that of tree species that have aerial roots. As the aging process continues, the creatures became ever less like homo sapiens and started to become completely united with the island’s plant kingdom. [ … ]

Back in England, Hubberfield wished to publish his research but was likewise convinced of the absolute need to protect these strange plant people from the outside world – so he decided to petition Queen Victoria to declare the island a royal protectorate. He made painstaking preparations to publish his research findings, was in close contact and correspondence with biologists and medical experts, many of whom were deeply intrigued by Hubberfield’s fantastic tales. For example, no less a mind than Charles Darwin wrote to Hubberfield in 1877: “Dear John Hubberfield, can it really be true that you have observed and obtained scientific evidence of such a daring mixture of the species?” [ … ]
However, in February 1879, a few weeks before the planned presentation of his findings to the academic community in London, John Hubberfield was run down by a carriage and died shortly thereafter of severe internal bleeding. None of those who had supported him doing research on the island had survived and returned with him. So it was that John Hubberfield got overlooked by history and along with him the drawings, measurements, photographs and notes he made on homo plantae.

The only other report on the island Hubberfield describes was from the hand of Joachim Preuss, lieutenant on a german submarine that reached it in 1943. Preuss likewise reports on an autotrophic world with strange animals and plants. In a ruined lean-to, which Hubberfield had no doubt originally built, he found notes and drawings belonging to the latter. Preuss himself was unable to find any of the creatures that Hubberfield described, but narrates what a magical aura the place had. [ … ]